We recently received the reports from the three wells that have been provided in India. They are in the villages of Sugarpar Musahari Tola, Chandha Badhar, and Gandhitola. In total 2,150 people now have access to clean water that will revolutionize their daily lives. These individuals will also hear of the saving power of Jesus Christ through the local church in India. See below for some more specific information on each well. We are grateful to God for everyone that has helped make these wells a reality. We pray that you will continue to partner with us as we work with Neverthirst to help meet the urgent physical and spiritual needs of the people of India and Sudan.

Posted by Leslie at 7:11 PM No comments:

During the month of February we reached the $17,000 mark, which meant we raised an additional $2,500 to fund a third well in India. This means that since we became obedient to God and began this effort on November 16, 2010 He has provided for two wells in South Sudan and three wells in India. We continue to be humbled and stand amazed at what God has done through this small project. Please continue to pray with us that the Holy Spirit will go forth with power into these villages that have received the wells and those that will in the months to come. We pray that as the Gospel is proclaimed that the people of India and South Sudan would call upon the name of The Lord and worship Him, because He is worthy!

We have updated the webpage to reflect a new goal of $19,500, which would fund a fourth well in India. As you are able, please support this cause to meet the urgent physical and spiritual needs of the people of India.
Posted by Leslie at 7:54 AM No comments:

God continues to provide funds in tremendous ways so that His name may be made known among the people of India through clean water. In just over a month, we have received about $3,000 in contributions towards our fund. This has allowed us to complete funding for a SECOND well in India. This means that we have now been able to fund two clean water wells in India and two in Sudan.
As of December 19, we have $1,734 towards a third well in India. This puts us $766 away from the goal of $2,500 to finish this well. On the donation page you will see a goal of $17,000. This reflects the $10,000 already raised for the two wells in Sudan and the previous $4,500 raised for the wells in India. As always, you can click on the link to the left of this page and donate. We would love to finish this well by the end of 2012. Would you help?

Posted by Leslie at 4:27 PM No comments:

A lot has happened since the last update on the blog. We have completed our third well project, this one in India. We are now very close to completing a fourth project over all and second project in India. This is in addition to the two wells that are located in South Kordofan, Sudan. It is truly humbling to see that what God has provided over the past two years. Since we began this project on November 16, 2010 there has been a total of $13,722 donated to the cause of sending clean and living water to Sudan and India. Now we are only $778 away from being able to fund another well that will provide a local church in India with an incredible and unique opportunity to reach those around them with the Gospel of Jesus Christ.

There have also been some cool events in Troy that have helped raise funds for the cause of clean water and the Gospel. The first WOD for Water in Troy raised over $15,000 in October. The brothers of the ATO fraternity at Troy University raised over $3,000 during their OcTauberfest party on campus.

We ask that you continue to pray for the wells in South Kordofan and for the church and people that are affected by them. Also for the people that will be impacted by the well that is currently under construction in India. And if you would be willing to contribute towards the final $778 to complete our next project in India you can always do that on the right side of this blog.
Posted by Leslie at 6:50 PM No comments:

We are only $428 away from the goal of $2,000 to provide clean and living water to the people of India. This will push the project up to a grand total of $12,000 raised in under two years to provide two clean waters wells in the Sudan and one in India. Each of these wells will be connected with a local church and will be used to spread the Gospel of Jesus Christ. I pray that you will join us over the next few weeks as we "finish it", and give $428 to help bring the Good News to India.
Posted by Leslie at 1:18 PM No comments:

Saturday afternoon we received the package in the mail that we have been praying for and anticipating for over a year now. It’s our report from Neverthirst on the two wells that have been completed in Sudan. There is a ton of information in the reports but I’ll try to fill you in on the basics.
Location
The wells are located in the South Kordofan province of Sudan. The population of this province is about 1.5 million with 2/3 of that population living in rural areas. Schools, health centers, and access roads are all generally in poor condition. Both wells are in the region known as Lagawa. The first one was completed in a village called Kayo and the other in a village called Mariam Al-Jughba.
Conflict
Like many provinces in Sudan, South Kordofan has been in conflict for more than two decades resulting in major destruction of infrastructure throughout the region. The conflict settles with the signing of the Comprehensive Peace Agreement between the North and the South. After local elections in May of 2011 that led to the creation of the world’s newest nation, South Sudan, security deteriorated as the two main parties became deadlocked over the future of the area. Neverthirst continued work on these two projects until June of 2011, when the actual military conflict began and they were forced to withdraw. Because of this we don’t currently have photos of the well projects but hope to attain some when the teams are allowed back into the province.
Prayer Requests
Here are the specific prayer requests from the people of South Kordofan:
Peace and stability in the region.
Those living in conflict areas.
Those that have fled into neighboring regions or countries.
Food security and all the new clean water projects in these areas.
The church’s work among the large Muslim population during this time.
Open doors to share the gospel in this time of uncertainty.
Our prayer continues to be that God would use these projects to make his name known among the people of Sudan. As we learn more information about church leaders in these villages or other information we will pass that along as well.
Thank you for your support on these projects! Through your obedience to God’s commands two villages in Sudan will have clean water and access to the Gospel for the next twenty years. It’s truly humbling to be a part of God’s work to ultimately bring about the scene described in Revelation 7:9, 10, and 12:
v. 9After this I saw a vast crowd, too great to count, from every nation and tribe and people and language, standing in front o the throne and before the lamb. They were clothed in white robes and held palm branches in their hands. v. 10 And they were shouting with a great roar, “Salvation comes from our God who sits on the throne and from the Lamb!”. v. 12 They sang, “Amen! Blessing and glory and wisdom and thanksgiving and honor and power and strength belong to our God forever and ever! Amen.”
We are currently only $628 away from finishing the funding for our third well in India. I hope you will join with us in prayer, thanksgiving, and funding for these projects.
Posted by Leslie at 12:18 PM No comments:

We are almost halfway to our goal of $2,000 to provide a clean water well to the people of India. I'm currently reading a book called The Unexpected Adventure by Lee Strobel and Mark Mittelberg. It's about taking everyday risks to talk with people about Jesus and the unexpected adventures that come along with that. I believe we could accurately describe our efforts to fund these clean water wells in Sudan and India as an unexpected adventure. God continues to surprise us by bringing so many different people from so many different locations and walks of life along with us to bring clean and living water to people throughout the world. What started as three small families from a small town in Alabama has now included young adults in Birmingham, school children in Gadsden, two anonymous matching donors, a children's ministry in Troy, birthday parties, and much more that we're not even aware of. We are so thankful to everyone that has seen the physical and spiritual urgency associated with the world wide water crisis and has chosen to do something about it. May we be careful to give all glory and praise to our marvelous Creator and Savior for everything done through this project, and for the souls that will be saved when His word goes forth.

We would be very grateful if you would consider making a donation towards this project during the Christmas season. You can always do so by clicking on the link on the right side of this page.
Posted by Leslie at 8:08 AM No comments:

What is Giving Life?

We are three families living in Troy, Alabama who desire to be God’s hands and feet to the nations. We are campaigning to raise funds to build a well in Sudan and India and ultimately send the news of the gospel. Our deepest desire is that God would receive all glory and honor for this project. This video was part of the presentation we watched on October 31, 2010. This was when God placed on our hearts and minds the urgency of the world-wide water crisis. If you have not viewed it before, please take a few moments to better understand this monumental problem facing much of the world. 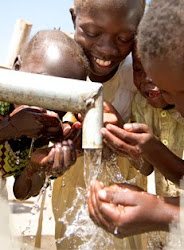